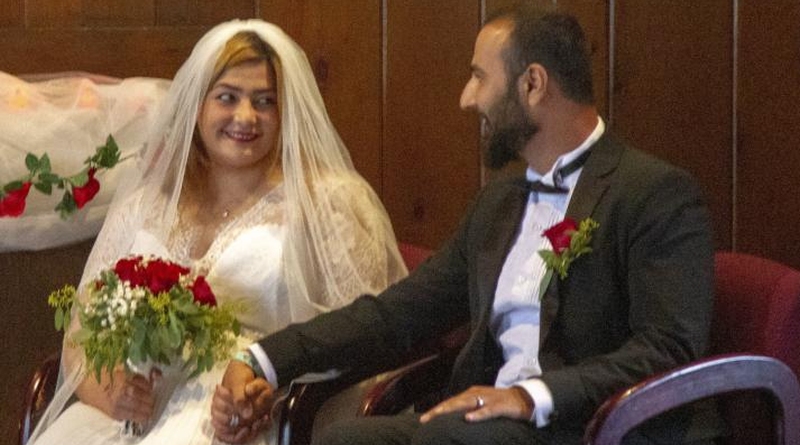 Editor’s Note: This story is courtesy of Network Indiana.

There are around 6,700 Afghan refugees now staying at Camp Atterbury. Around 150 more are due to arrive in the coming days.

The military base, which once served as a POW camp in World War II, is now a make-shift community with people living life as they usually would. But, they are also learning how to assimilate into American society with the help of teachers like Sara Jallal.

“They’ve adapted really well,” Jallal said. “We don’t give them as much credit. We don’t give kids as much credit as they deserve. Some of the adults are taking it a little harder and it’s harder for them to assimilate and learn how life is here. But, the kids have been doing really good.”

Jallal was born in Afghanistan and when she was five her family fled the country for America.

One of the people she is helping make the transition is Sulman Akbarzada. He and his then-fiance, Arzo, were supposed to be married the week that the Taliban converged on Kabul, but they had to cancel their wedding and decided to flee the country. They fled because their families had worked with U.S. forces while they were fighting the Taliban over the last 20 years.

“Because my father-in-law worked with the Army and the most dangerous was for her,” Akbarzada said. “Because the family of the Army people was not safe in Afghanistan.”

A couple of weeks after arriving at Camp Atterbury he and Arzo were allowed to be married at the base chapel. Now both are looking forward to starting a new life here in America. He and Arzo have plans to resettle in San Diego once they are allowed to leave Camp Atterbury.

“They can put us anywhere they want. I want to just be in peace. That’s all I want,” Sulman added.

Many other new lives were started here as well. As of this week, 10 babies have been born to Afghan refugees at Camp Atterbury, all of them automatically U.S. citizens since they were born here.

Refugees are also still able to hang on to the culture of their homeland, though. They are served three meals a day, all of which reflect Afghan cuisine. They also have access to 24-hour snack stations set up throughout their living quarters. The base also holds regular town halls so that refugees can speak directly with base leaders to express concerns and recommendations to make their stay a little easier.

Photo by Sgt. Dylan Bailey. An Afghan family has their wedding at Camp Atterbury, Indiana Oct. 9, 2021 after the original ceremony was postponed during the Afghanistan evacuation.