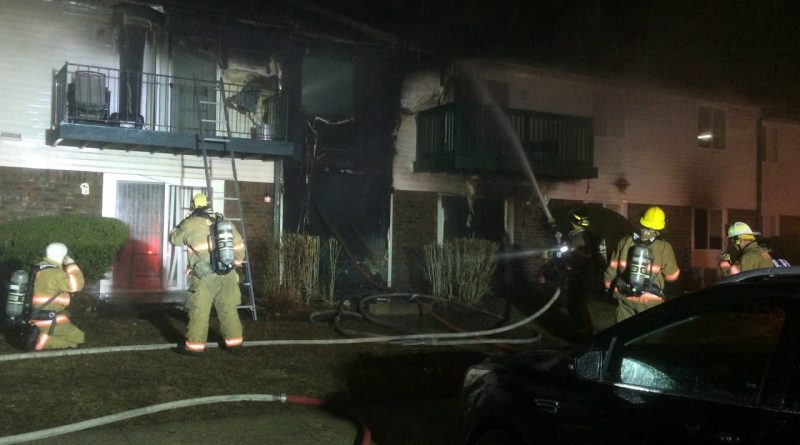 Columbus firefighters fought a major fire last night at Quail Run Apartments, that caused more than a quarter of a million dollars in damage, left 17 people homeless and killed at least one family pet.

The incident started when a resident noticed heavy smoke coming from a downstairs apartment in the 1100 block of Kevin Drive at just before 10 p.m.  last night. Residents evacuated in their night clothes, coming outside to the heavy, cold rain. Two families were trapped by fire in the stairwell and had to be rescued from their apartments with ladders, says Capt. Mike Wilson, spokesman for the Columbus Fire Department.

Most of the damage was confined to the single apartment and the exterior of the building, Wilson said. Firefighters were able to stop the blaze before it spread to the building’s eaves, where it could have caused even more damage.

While firefighters worked at the scene, the apartment complex provided shelter to the displaced families to protect them from the rain and cold. After the fire was extinguished several families were escorted inside and allowed to gather some personal belongings, Wilson said.

Four families of 10 total people are being taken in temporarily by the Salvation Army while seven other people found their own shelter, Wilson said. A search of the apartments revealed a dog and cat who survived. Another dog died and a cat remains missing.

No injuries were reported at the scene and the cause of the fire remains under investigation.