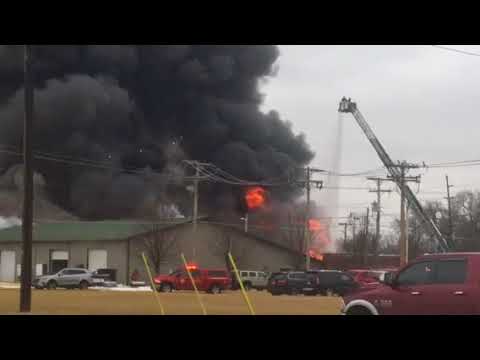 Columbus firefighters remain on the scene at Carpet Mania at 10th Street and Michigan Avenue. Capt. Mike Wilson, department spokesman, says that the fire was marked “under control” 4:48 p.m. He adds that crews remain on the scene battling pockets of fire under collapsed portions of the building. Still no word at this time as to what may have caused the fire. Wilson says that two firefighters suffered minor injuries, but no civilians were hurt.

Columbus firefighters say that the fire at Carpet Mania on 10th Street has caused the evacuation of four businesses and they are asking that you steer clear of the area.

The fire was called in at 12:25 p.m., says Capt. Mike Wilson and firefighters found that the building being evacuated when they arrived.  The building is fully engulfed at this time and there is structural damage that is keeping firefighters from entering the structure.

He estimated that it is about two thirds contained as of 2 p.m.

Emergency workers ask that you steer clear of the area between 10th Street and Michigan, all the way to 13th and Cottage.

Cummins Child Development Center evacuated, asking parents to come and take their children home. They say that the evacuation was completed within seven minutes.

We will have more information as it becomes available.